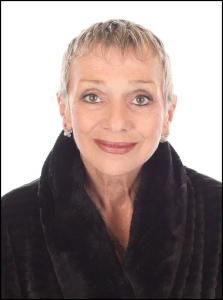 Blessed with extraordinary beauty and talent, but dogged by mental ill-health and depression, Jacqueline Pearce led an extraordinary life. During her career she played many different roles on stage, screen and audio, but to Blake's 7 fans, Supreme Commander Servalan will always be the one that defines her.

She felt a close affinity with the character, telling Horizon in a 1980 interview: "I know I am Servalan – she is my alter ego!" although in subsequent interviews she explained that Servalan was one aspect of herself, that had taken her over for a long time.

Although she craved security, Jacqueline led a nomadic lifestyle which took her to Los Angeles, Cornwall and Africa. She enjoyed luxury - her favourite drink was champagne – but was happiest when living simply in St Ives, the African Bush and finally in a small village in Lancashire.

Jacqueline was born in Woking, Surrey and grew up in Byfleet. Her childhood was uncoventional: her mother left when Jacqueline was sixteen months old, and she was raised jointly by her father and another couple with whom they shared their home. Her adolescence was blighted by a repressive convent school education, but one of the teachers there introduced her to drama by giving her elocution lessons and taking her to the theatre.

She trained at RADA, where her fellow students included Anthony Hopkins and John Hurt. Hopkins told her: "You have it in you to become the greatest actress of the 20th century." John Hurt became a lifelong friend. 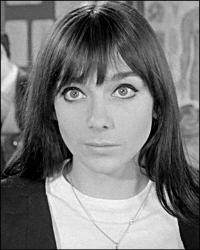 Her first TV appearance was in a 1964 ITV Play of the Week, with Ian McShane, John Hurt and her then-husband Drewe Henley, whom she had married in 1963. Other TV appearances in the mid-1960s included episodes of Danger Man, The Avengers and Man in a Suitcase.

In 1966, Jacqueline starred in two Hammer Horror movies: The Reptile and Plague of the Zombies. Despite the alarming make up, her character in The Reptile came across as sympathetic. Jacqueline said: "Anyone who has to spend six months of the year as a snake deserves a lot of compassion!"

Jacqueline played a gypsy in the 1965 movie Sky West and Crooked. She found it an interesting experience, as she later discovered that she had gypsy blood from her mother's side. She thought that may have been the source of some of her nomadic tendencies.

In 1968, she co-starred with Jerry Lewis, Terry Thomas and Bernard Cribbins in the comedy Don’t Raise the Bridge, Lower the River, and appeared in Carry On Don’t Lose Your Head.

Following her divorce from Drewe in 1967, Jacqueline went to Los Angeles where she studied at the Lee Strasberg Actors Studio and worked as a receptionist for Sammy Davis Jr, who was a close friend at the time. While in America, she suffered a nervous breakdown, and spent six months in a Hollywood mental home. It was where Marilyn Monroe used to go for her breakdowns, and Jacqueline believed she had even been given Marilyn's room.

Although Jacqueline felt that her career had stalled, more TV roles came her way when she returned to England, including Rosa Dartle in the BBC's 1974 series David Copperfield and Claudia Haswell in Couples. 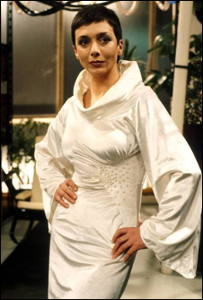 Although it was series creator Terry Nation who decided in a flash of inspiration that the Supreme Commander of the Terran Federation should be a woman rather than a man, it was Jacqueline's performance that made Servalan so dangerous and fascinating. She told Horizon that each of the cast had been given their characters on the page, and were responsible for creating them. It was up to the individual actors to make whatever happens, happen.

Servalan had initially been written to be a supporting role in one episode, but became a recurring character with regular appearances throughout all four series of Blake's 7. She told Horizon that this was because "I was so very good in my first one!"

It is fascinating to trace the arc of the character – and her costumes – as Servalan moved from pursuit of Blake to pursuit of personal power, and her sizzling relationship with Avon after Gareth Thomas left the series. Jacqueline felt that Avon and Servalan were mutually dependent; two sides of the same coin, and said she would have liked to explore that relationship further.

Her favourite episode was Sand, written by Tanith Lee. Of all the Blake's 7 writers, Lee may have had the best understanding of Servalan's complex, multi-faceted character. She and Jacqueline were friends, and the script for Sand blurred the lines between fact and fiction, weaving in aspects of Jacqueline's personality and a real life anecdote. Jacqueline told Horizon that the episode was appropriate to her personal life, depicting a side of Servalan that hadn't been seen before and needed to be shown.

Much has been written about Servalan's costumes, with countless comments regarding high heels and sand dunes. The intial design had been for a military-style outfit, but Jacqueline suggested that Servalan's costumes should be ultra-feminine. The white outfits in the first two series were meant to contrast the evilness of the character, while the black in series three were symbolic of mourning her 'psychic miscarriage' in Children of Auron. She wore red in the Series 2 episode Gambit, because all the other characters were in black and white. Her costumes were glamorous, and became more flamboyant as the series progressed, especially those designed by Nicholas Rocker (or 'Rocky Knickers', as Jacqueline called him). 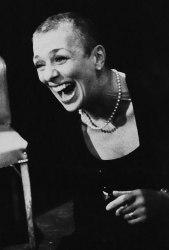 Over the years, Jacqueline appeared with some of her fellow cast members on TV specials and game shows. In 1980, she and Paul Darrow competed in ITV's sports-based Star Games. She was amused that she'd had to be removed from the archery round after nearly shooting someone in the eye! In 1991, she was a guest on the Jonathan Ross show, together with Gareth Thomas and Michael Keating; their first TV reunion since the series ended. She competed together with Michael Keating in Pointless Celebrities 1970s Special in 2016.

She said that Princess Carabbo had been great fun to make, on location in two stately homes outside London. During the filming of one of her first scenes, Kevin Kline told her a joke. "I laughed and the director heard me. He told me to keep the laughter in - I had to do a lot of dirty laughing!"

Jacqueline's theatre work included West End appearances in Harold Pinter’s Otherwise Engaged and JB Priestly’s Dangerous Corner. She played Joy Gresham in Shadowlands; appeared in Tom Stoppard’s Night and Day and in 1999 performed her one woman show, A Star is Torn at the Edinburgh Festival. In 2000 she played the psychiatrist in Deceptions by Paul Wheeler. 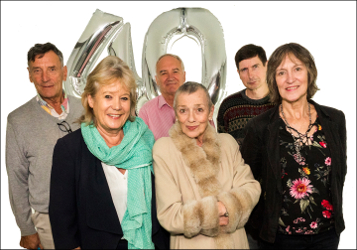 Her audio work included voiceovers for the video games Gender Wars and Queen: The eYe, together with Paul Darrow. She also shared with Paul the narration of the BBC audio book of Trevor Hoyle's novelisation of Project Avalon. Together with other members of the original cast, she reprised her role of Servalan for two BBC audio plays by Barry Letts; The Sevenfold Crown and The Syndeton Experiment.

In 2013 Jacqueline returned to play Servalan for Big Finish's range of Blake's 7 audio dramas, reuniting her with her fellow former cast members in The Liberator Chronicles and the full cast series.
Her favourite audio script was Three by James Goss, a powerful two-hander play which explored the darker side of Servalan's character. Her last appearances as Servalan were in Big Finish's 40th Anniversary Special The Way Ahead, and the epic 12-part series Crossfire, in which President Servalan and the deposed President of the Federation battle for supremacy after the Galactic War. Jacqueline also performed in a number of Doctor Who audios for Big Finish, lastly as Cardinal Ollistra in the War Doctor series, with her lifelong friend John Hurt as the War Doctor.

In the late 1990s, Jacqueline moved from London to St Ives in Cornwall, where she worked as an artists' model. She told Horizon: "I needed that time in Cornwall to be completely on my own, with no money and no-one to rely on but myself. My friends said that I was the strongest person they'd ever known, but all I knew was my vulnerability. I had to be in a position where I could find out how strong I really was, and that I could cope on my own." She fell in love with Cornwall and relished the acceptance she found among its people. Modelling gave her enormous pleasure, and she loved being an inspiration for the local artists. 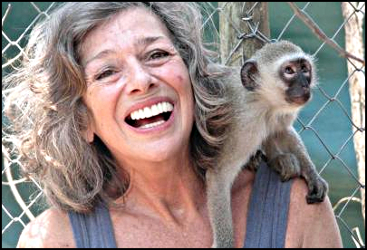 Around 2006, she relocated to South Africa, initially to care for orphaned baby vervet monkeys. This was one of the happiest times of her life, and is lovingly described in her 2012 autobiography From Byfleet to the Bush. Her book describes her life's journey starting with her childhood in Byfleet, via her nomadic actors' life in the UK and America to finding the home she always craved in Africa. She wrote with great honesty, unafraid to bare all - in every sense of the word – describing her mental breakdowns with a refreshing matter-of-factness and a certain amount of black humour. She narrated the audio version of her book, recounting amusing incidents with a wicked, not quite suppressed chuckle. The overwhelming emotion with which she describes the first time she bonded with a baby monkey is intensely moving.

Jacqueline was interviewed twice by Nicholas Briggs: in 2000, for the Myth Makers video documentary series, and Call Me Jacks – Jacqueline Pearce in Conversation, a 2016 audio interview for Big Finish. Both interviews took place, of course, over a bottle of champagne. No subjects were off limits as Jacqueline speaks with wry humour and disarming honesty. Her tales were by turn outrageous, hilarious, profound and deeply moving, punctuated by her trademark wicked laugh and exclamations of "Darling!"

Jacqueline was always gracious to her legions of fans, rewarding their loyalty with friendliness and approachability. She loved chatting to people at conventions and signings; giving generously of her time. She told Horizon: "I’m deeply grateful for the people, my friends, who supported me through the dark times. It’s true what others have said; there’s no fan like a Blake’s 7 fan. You have been loyal to me through thick and thin, and I can’t tell you how grateful I am. It means so much."

Jacqueline ended her days in a small village outside Bolton, in Lancashire, where she was living happily with her dogs. Having survived two bouts of breast cancer, she finally succumbed to lung cancer a few weeks after it was diagnosed in August 2018.

She said: "I do believe that love is the ultimate power, and I believed that for so long, and fought for that, even though it seemed at times that I was totally wrong. But now, I find that I’m right. It’s been quite a long and very perilous journey. I’ll never be an ordinary human being, I suppose, but that's probably not a bad thing."

"You are undoubtedly the sexiest officer I have ever known. Goodbye, Servalan." Carnell, Weapon.