· Total Rebels: 309
· Newest Rebel: parkertoons
Out Now from Big Finish: The Worlds of Blake's 7 - After the War 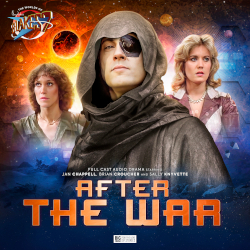 OUT NOW FROM BIG FINISH: The Worlds of Blake’s 7: After the War


Big Finish have today released After the War, the latest in their Worlds of Blake's 7 range. This set stars Sally Knyvette as Jenna, Jan Chappell as Cally, and Brian Croucher as Travis, in stories written by Trevor Baxendale, Steve Lyons and Katharine Armitage.

The galactic war has unexpected repercussions. Humanity struggles. The Federation is reeling. And enemies are still at large. Jenna Stannis, Cally and Space Commander Travis each have their own startling encounter with an alien threat from a distant world...

Andromeda One by Trevor Baxendale
Space Commander Travis knows that a data thief on the volcanic planet Amerinth can crack the encrypted coordinates for Star One. His road to hell is paved with bad intentions. Will an old acquaintance help him or thwart his treacherous purpose?

Fallout by Steve Lyons
When her life capsule crashes on a farming world, Jenna Stannis strikes up an uneasy alliance with the local population and a suspicious Federation officer. Will any of them recognise the alien menace that threatens to destroy their fragile coalition –and their lives?

The Enemy by Katharine Armitage
In the aftermath of their narrow escape from a devastated Liberator, Cally tracks down Jenna to a dilapidated space service station. Can Cally rescue her old friend and get them both to safety? Or has she unwittingly fallen into a deadly telepathic trap?

Producer Peter Anghelides said:
"We’ve done The Worlds of Blake’s 7 episodes set in the third TV series before, but we haven’t explored the motivations and experience of the aliens from the cliffhanger ending of the second series. The three new stories in After the War bring Jenna, Cally and Travis face-to-face with creatures from the next galaxy for the first time.”

Brian Croucher said:
“Andromeda One is another one of those exciting Blake’s 7 stories! Travis lands on another planet with a young lady - they have a bit of a journey and a chase. He’s going to Star One to perish!”

Sally Knyvette said:
“It’s extraordinary because I never thought that Blake’s 7 would come back to me later on - it's been fab! It feels full circle. Jan and I are really enjoying working on these Big Finish episodes. I have no idea what’s going to happen next but I’m quite excited. I hope Jenna will go on for the rest of my life - I love her now. She’s feisty but is always on the side of good and freedom fighting. She’s Robin Hood in space!”

Jan Chappell said:
“The Enemy is a fascinating story - I wasn’t quite sure where it was going myself. It was very interesting. Gradually Cally puts together that something is very wrong.”

After the War is available now on CD and download at pre-order discount prices exclusively from Big Finish.