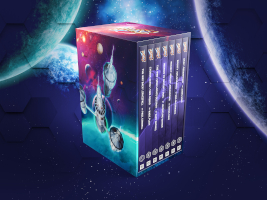 Big Finish have announced that the complete first season of Blake's 7 (+ Redemption!) will be published as a limited edition collection of novelisations.

Based on Terry Nation's original scripts, plus additional reference material, each book comprises two episodes from the TV series. These have been adapted by well-known writers into full-length hardback books, and released as a single box set limited to just 1,500 copies.

Producer and Commissioning Editor Peter Anghelides said: “Our wonderful writers bring their talent, imagination and wit to these new novelisations. Each of them already has an impressive track record as a novelist, not to mention a wide range of other writing in prose and other media.

“Unlike conventional novelisations, which tend to be written before a TV show or movie has been completed, these are all informed by the available reference materials, 45 years of the show, and the inventiveness of our authors. They are all big fans of the series — our very own ‘Blake’s 7’ for this unique collection.

“The Nation Estate very helpfully allowed us to see original drafts written by Terry, some hand annotated, to reference as the origins of the TV show. Where appropriate, we’re staying faithful to the original series. For example, some draft scripts feature the characters Arco Trent and Brell Klein, who make it onto Liberator – but (spoiler alert) they won’t be escaping Cygnus Alpha in our novels.

“However, along with BBC filming, camera, and rehearsal scripts, those early drafts have informed these brand-new novels for all thirteen episodes of that first season. And with Redemption as the conclusion of Terry Nation’s original fourteen-story run, it’s the first time that any of the second season has been novelised!”

Blake’s 7: Origins is due for publication on 27 March 2023, marking 45 years since the original broadcast of the first season’s final episode, Orac. The box set of seven books is now available to pre-order for just £99.99 (plus postage & packing) exclusively from Big Finish.
Current Poll
Which is your favourite B7 series?