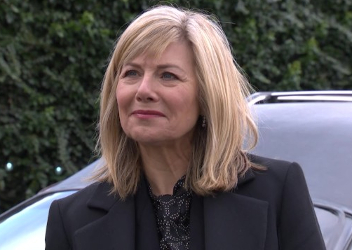 TV interview: Glynis was interviewed on Good Morning Britain on Wednesday 27th April at 8.45am talking to Susanna Reid about her role in Hollyoaks.

"Everyone is scared of Norma" - Glynis is interviewed in the Radio Times about her role in Hollyoaks and much more...
Radio Times article here: Radio Times

Article with photos in the Metro here: Metro.

Hollyoaks Spoilers reveal: “New character Norma arrives in the village later this month. The soap is currently airing a dark storyline with Ethan, Ste and Sienna, as both Ste and Sienna are knee deep in some dodgy dealings with back-stabbing and betrayals aplenty between the three of them. But things take an unexpected turn when Ethan's boss Norma arrives in the village. She turns up in a hearse, and tells Ste and Sienna to get inside the hearse. Teasing her arrival a bit more, Matthew said that if you think that Ethan is unhinged just you wait until you meet Norma. She is absolutely terrifying; Ethan is terrified of her and he has every reason to be....”