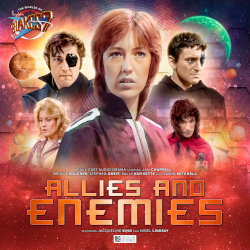 OUT NOW FROM BIG FINISH: The Worlds of Blake’s 7: Allies and Enemies


Big Finish have today released Allies and Enemies, the latest in their Worlds of Blake's 7 range. This set stars Sasha Mitchell as Arlen, Jan Chappell as Cally, Sally Knyvette as Jenna, with Brian Croucher and Stephen Greif as Travis, in stories written by Lizbeth Myles, Simon Guerrier and Jonathan Morris.

From the start of the rebellion to its brutal conclusion, Arlen has hunted for Roj Blake. Cally fights beside her. Jenna Stannis works for her. Space Commander Travis is her mentor. As she plays each side off against the other, how will Arlen decide who are allies and who are enemies?

Saurian Major by Lizbeth Myles
Saurian Major is a key Federation communications hub. Federation Officer Arlen undertakes an undercover mission to destroy the rebel factions that threaten it. The last person she expects to find is an Auron outcast among the humans. Will the mysterious Cally disrupt her plan?

No Name by Simon Guerrier
Everyone on Vanstone is hiding something. That’s why they are there. Hiding from her own past, Arlen wonders what has brought Roj Blake to this remote outpost. Has Arlen uncovered a buried secret? And what does Space Commander Travis want on Vanstone?

Sedition by Jonathan Morris
Jenna Stannis knows that smuggling guns will help free Solta-Minor from the Federation. And she suspects that’s not the only reason why Arlen wants her help. But Jenna doesn’t know who else is on the planet. How can Travis have survived Star One?

Sasha Mitchell said:
"It’s been such fun for me and really nice to revisit Arlen. I always wanted to do more with her, but I never had the chance. I love the passion with which people support Blake’s 7 after all of these years. I was delighted when I was approached to do this. I’ve had such a good time!"

Allies and Enemies is available now on CD and download at pre-order discount prices exclusively from Big Finish.

Cover artwork by Mark Plastow
Current Poll
Which is your favourite B7 series?