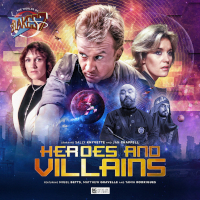 If you enjoy reading - or writing - Blake’s 7 fan fiction, it may be reassuring to know that most of the people behind Big Finish Productions are mad, sad fans just like you. The difference is that thanks to Big Finish, their stories can be brought to life as audio dramas and books.

The Worlds of Blake’s 7 range aims to expand the B7 universe by adding background to characters seen only briefly in the TV series. It's a testament to the strength of those original scripts that fans can enjoy further exploration of the people, the planets and the concepts of Blake’s 7.

In particular, Heroes and Villains again showcases what Jenna and Cally can get up to when they are given more to do. 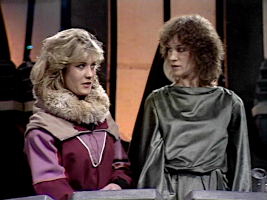 Smugglers. Slave-traders. Bounty hunters. Jenna Stannis knows from personal experience that you just can’t trust the Amagons. So why has she delivered herself alone into the hands of the infamous Amagon Queen? And can Cally help her escape before a Federation commander and his ruthless mutoid track them all down?

When Trevor Baxendale is the writer, you know what to expect - a clever, all-action tale in which plot lines cross and re-cross just enough to mislead the audience before everything is finally resolved. Sometimes he brings in new characters with little explanation, but he's good at tying together all his loose ends. Behind the scenes, Tania Rodrigues admitted that she needed to make a chart to keep track of all the twists and turns of the plot, while the doubling of some roles led to Shane Zaza talking to himself during one scene - quite a feat to carry off!

In this story, we have the unlikely combination of Mandala, once Queen of the Amagons, working an arms deal on a minor planet, Jenna in a slave market, Cally helping local dissidents against the Federation's exploitation and Chief Officer Spindler, whose second-in-command is an unusually assertive mutoid. How is this all going to work out?

There's a lot of being locked up in cells and escaping, swimming from sinking boats and shooting, as the balance of power swings from one side to the other, and from one individual to the next. It's not all greed and fighting, though. The human cost of losing a loved one to the Federation's bionic rebuild process is nicely demonstrated, as is the lasting effect of torture for the victim.

For me, the resolution of the story is disappointing, since it hinges on a twist that I found highly unlikely. Blake’s 7 doesn’t have happy - or even tidy – endings. However, the Federation shouldn't get away with turning people into mutoids, so perhaps it's fitting that this time one of them bites back.

It's great to have Jenna and Cally together again, with rather more action than they were allowed on TV. Music and sound design are by Alastair Lock, known for playing both Zen and Orac in other BF audios. His soundscapes are evocative without being too insistent, sensitively enhancing the dialogue. 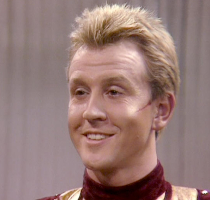 2. The Deal with Dorian by Mark B Oliver
Featuring:
Matthew Gravelle as Dorian
Gabrielle Glaister as Professor Skillane

Jenna and Cally need supplies to repair the damaged Liberator, and treacherous dealer Dorian is the only one who can help. But he has dangerous plans of his own at a remote Federation research station. Will Cally and Jenna realise the danger they are in before they fall under Dorian’s influence?

Having received Chris Boucher's permission to bring back the character of Dorian, Peter Anghelides knew exactly who should write this. Mark B Oliver has been a big B7 fan since childhood, and Dorian was always his favourite character. He had already written other BF audios, but this is his first Blake’s 7 story.

It was convenient that in the TV series, neither Cally nor Jenna had met Dorian, so in this adventure we could have them acting independently of the rest of the crew, and managing to 'kick ass' in ways that both Sally and Jan felt their characters had lacked in the original series.

In a fast-moving tale where details matter, we rediscover not only Dorian's inescapable charm, but also Cally's telepathy, her Moon Disc, and not least the dangers of dealing with the Terra Nostra.

Aquitar provides our first reminder - it's needed for the teleport, remember? But it is equally valuable to others, as Jenna discovers when she tries to intercept a shipment of the stuff. So what is really going on at a secret Federation Research facility, and what cargo is Dorian bringing for the Professor conducting the experiments?

There are deals, and betrayals. We're given another demonstration of how the ruthless Federation use their people as assets, while Dorian's hypnotic charm gives him control over everyone - almost.

All the characters are well-written and believable, especially Dorian. The complex plot twists and turns in a satisfying way; more linear than in Trevor Baxendale’s story, but equally well-crafted. I'd like more B7 stories by Mark B Oliver, please.

The sound design and music are by Jamie Robertson, while Alastair Lock reverts to his other roles playing Zen and Orac. Jamie has worked on several other B7 audios, and creates varied backgrounds for the different settings in the story which fit comfortably around the dialogue. Individual effects are instantly recognisable, such as when Cally uses her telepathy, or the explosions in Professor Skillane's lab: they help to key the listener to the action. 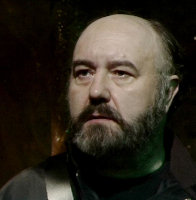 Captured and alone, Jenna is defenceless in the Federation’s clutches. Cally is desperate to find her friend - and they are both far from the Liberator. In a hostile Federation battleground, Jenna discovers there can be no escape from her cruel interrogator, the notorious Shrinker.

While this story deals with darker, nastier subjects, I found it the most enjoyable of the trilogy, perhaps because more time was given to reflection and explanation.

We first met Shrinker in the TV episode Rumours of Death, when he was responsible for interrogating Avon - enough to make him hated by all Avon fans! But we learned nothing about his background - what makes someone become a sadistic torturer? Peter Anghelides wanted to know more about Shrinker, and prompted Andrew Smith to write an answer to that question.

A story of this nature with Jenna alone might have been too intense, so we continue to explore how the girls cope when separated from their friends, their ship and even from each other. Having been captured by the Federation, Jenna is awaiting interrogation on board a Federation Penal Orbiter station.

As the situation unfolds, Jenna has the chance to spend time alone with Shrinker, but this time she's the one asking the questions. Cally is determined to rescue her, but meanwhile she discovers that some monsters aren't what they seem, and that even cannibalistic mutants sometimes deserve our sympathy.

The sound design for this story is by Benji Clifford, and I was more aware of individual noises as I listened. The background soundscapes tended to be muted, allowing emphasis on more specific sounds designed to convey the horror of an interrogation and, even worse, the anticipation of what might happen when Shrinker begins his work.

The interaction between characters is more personal than in the previous two stories, providing scope for some meaningful conversations. Our sympathies are swayed by what these uncover, both about Shrinker and about what the Federation have created. In this adventure, talk is often as important as action.

Conclusions
Do these Worlds of Blake’s 7 audios work for people who don't know B7? I'm not sure. They ask a lot of the listener, especially those who are unfamiliar with the television series. Fans will enjoy picking up on the many references and continuity with the original series, but without that background much of what colours the stories may be lost.

Due to Covid restrictions, most of the recording was done remotely, with Paul Midcalf at Audio Sorcery mentoring novices in their home ‘recording booths'. Well done!

A couple of technical criticisms: I would have liked to hear a longer trilogy theme - 30 seconds isn't really enough to appreciate the work that went into it. Also, sometimes the audio tracks end rather abruptly, before the sounds have completely finished. On the other hand, the interviews are slightly longer - thanks!

Heroes and Villains is a brave attempt to explore more deeply a series that, as director Lisa Bowerman says, is often allegorical, and has parallels with real life. Opening up these doors gives us a more rounded view of some interesting characters, and a wider look at B7 as a whole.